Peacock Bass aren’t the only fish you’ll catch from the Amazon River and tributaries such as the Rio Negro. Piranha and other toothy fish are common along the endless river channels.

Some of the more common fish you may catch include White Piranha, Black Piranha – the biggest meat eating Piranhas, Red-bellied Piranha, Bicuda – they look a little like a barracuda but with a long pointed snout full of small sharp teeth – and Wolffish.

Wolffish look somewhat like North American Bowfin (dogfish, grindle, mudfish, etc.) though they are more aggressive and vicious, with a wavy tail instead of the rounded tail of the freshwater dogfish.
These aren’t the only fish you can catch. Just the more common fish. There’s also Payara with the vampire-like fangs, the giant Arapaima (pirarucu) and many, many varieties of catfish that can grow bigger than a man! You have to target these in specific areas with targeted techniques to have a shot at them while the other fish above are more often caught on various lures while fishing for Peacock Bass, jerkbaits being the most common lure these other fish attack. 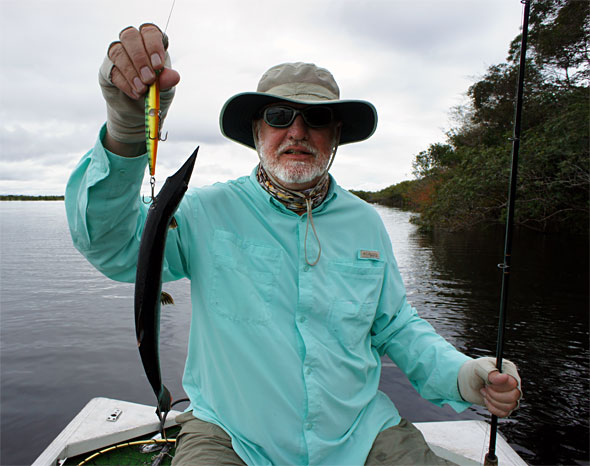